What distinguishes a gel pen from others is the ink, which consists of pigment suspended in a water– based gel. Since pigments are opaque, gel pens are available in bright colours that stand out on darker paper. By contrast, ball-point pens use a paste ink based on a solution of a dye and alcohol solvent, and fountain pens use ink made from dye in a water-based solvent.

Another trait of gel pens is that they resist common laboratory analysis. The American Secret Service has maintained the International Ink Library for many decades. Because manufacturers change their ink formulas slightly from year to year, thin-layer chromatography (TLC) can be used on ink to trace the manufacturer and date of manufacture of most inks. The pigments in gel ink do not dissolve, and therefore cannot be analysed with TLC. 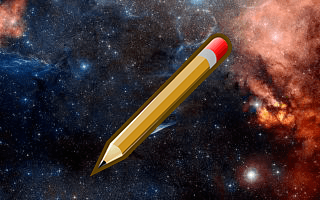 An urban legend in circulation since the 1970s (and told on a 2002 episode of the West Wing) tells of NASA spending large sums of money, typically in the millions of dollars, to develop an instrument that would write in space (a space pen). The typical punch line is that either someone supposedly should have sent NASA a pencil, or that the Soviets used pencils. While considered humorous, the story is not true. In fact, lead pencils were used on all Mercury and Gemini space flights, and were replaced by pressurised “space pens” (independently developed without NASA funding) after the Apollo 1 fire. Pencils are, in fact, still used in space, for example aboard the International Space Station.