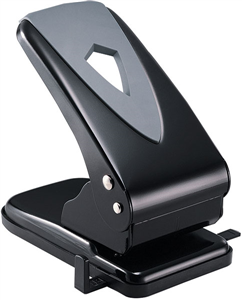 Benjamin Smith called it the conductor’s punch. Internationally the two hole punch is most widely used, but in regions that use the U.S. “Letter” paper format ( United States, Canada and in part of Mexico and the Philippines) a three-hole punch is most common. Less frequently seen is the two-hole file binder punch. In Sweden, a four-hole standard called “triohalning” is almost exclusively used. On the TV show, The Office, Jim Halpert dresses up as “Three Hole punch Jim” for Halloween.

Get our FREE Office Stationery Catalogue

Please log in again. The login page will open in a new tab. After logging in you can close it and return to this page.